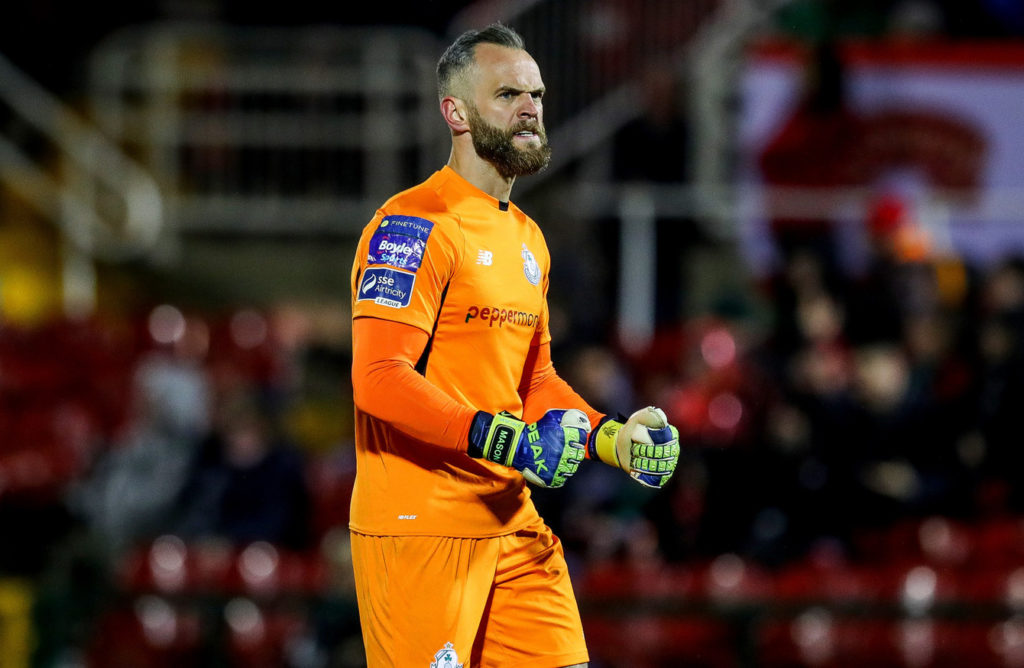 After rising through Linfield’s junior ranks, Mannus made his first senior squad appearance in 2002. He established himself as the club’s first choice goalkeeper at a young age and made his 250th appearance before his 25th birthday.

Mannus is one of the few goalkeepers to have scored a goal in the run of play. In a match against Omagh Town in 2003, his long goal kick bounced over the head of opposing goalkeeper Gavin Cullen and into the net. As a result of scoring his first goal, he was given the Player of the Month award for October 2003. At the end of the 2003–04 season, Mannus signed a two-year contract with the club.

During his career at Linfield, Mannus helped the club win trophies, such as the Irish League/Irish Premier League, Irish League Cup and County Antrim Shield. In April 2008, Mannus was named the 2007–08 Ulster Footballer of the Year.

During his time at Linfield, Mannus was mentioned as a transfer target for a number of clubs, being linked to Everton in January 2005,Doncaster Rovers in April 2005and Motherwell in December 2008. In August 2006, Mannus turned professional at Linfield and signed a three-year deal.

In November 2008, Mannus turned down the offer of a new contract by Linfield and by April 2009, Linfield Manager David Jeffrey said he expected Mannus would leave the club and try to get a move to a club in England or Scotland.

At the end of his contract Mannus was linked with a move to Swansea City, and was reported to be training with Falkirk. In July 2009, he was given a trial with English League Two side Bradford City, but after playing three games without conceding a goal, he was released and returned home.

In August 2009, Mannus signed for Shamrock Rovers. A week after joining, he made his debut for Michael O’Neill’s side in a 2–2 draw against Dundalk on 22 August 2009.

In his second season at the club, Shamrock Rovers won the 2010 League of Ireland. After winning his first title at the club, Mannus said he had no regrets about the move, even if it harmed his international career.

Mannus was nominated for the PFAI Players’ Player of the Year award in 2010, but lost out to Richie Ryan of Sligo Rovers. He was awarded the Soccer Writers Association of Ireland Goalkeeper of the Year Award for 2010.

In his final match for the club, Mannus kept a clean sheet in a 0–0 draw away to Flora Tallin on 19 July 2011, in the Champions League Second qualifying round second leg meaning Shamrock Rovers went through to the next round, winning 1–0 on aggregate.

Mannus signed a one-year contract with St Johnstone on 21 July 2011, after invoking a clause in his Shamrock Rovers contract that allowed him to leave if a British Club made an offer after 20 July 2011. Initially Mannus was a back-up goalkeeper behind Peter Enckelman, but after Enckelman conceded five goals against Dundee United, with two of the goals coming from his mistakes, Mannus was given his chance, making his debut for the club in the Scottish Cup Fifth round replay, as St Johnstone lost 2–1 against Hearts on 14 February 2012. He then made his league debut for the club in the following game, on 19 February 2012, in a 0–0 draw against Aberdeen. After getting into the team, Mannus said he believed playing first team football would help his international career. At the end of the season he signed a 12-month extension.

In the 2012–13 season, Mannus hepled St Johnstone to finish in third place in the SPL, ensuring qualification for the Europa League. At the end of the season, he signed another one-year contract with the club.

The 2013–14 season started well for Mannus, keeping a clean sheet as St Johnstone won 1–0 away to Norwegian side Rosenberg on 18 July 2013, in the Europa League second qualifying round first leg. After drawing 1–1 in the second leg St Johnstone went through 2–1 on aggregate, afterwards Mannus suggested that Rosenberg had been “arrogant” and had underestimated St Johnstone. In the next round St Johnstone won away from home in the first leg again, beating Minsk 1–0, but lost by the same scoreline at home in the second leg and were then defeated on penalties, despite Mannus saving twice during the shoot-out.

On 11 August 2013, Mannus sustained a shoulder injury during a match against Kilmarnock, which ruled him out for six weeks. He came back from his injury earlier than expected, making his return on 14 September 2013, in a 2–1 loss against Hibernian. On 18 January 2014, Mannus was sent-off, along with Ryan Stevenson of Hearts after they were involved in an alteration “following an angry goalmouth melee”. He would miss one match after the club decided against appealing the sending off. While serving his suspension, Mannus fractured a bone in his thumb, which was expected to keep him out for six to eight weeks. However, he made his return to the side after only two weeks, on 16 February 2014, as St Johnstone lost 3–0 against Celtic.

The 2014–15 season started well for Mannus, as he saved a penalty from Marco Schneuwly during a shoot-out as St Johnstone beat Luzern in the Europa League 2nd Qualifying Round. With his contract expiring at the end of the season, Mannus’s future was uncertain, leading the club to immediately start talks over a new contract. Mannus extended his contract with St Johnstone for a further two years, until 2017, on 6 April 2015. Mannus was an ever-present player throughout the 2014–15 season and helped the club qualify for the Europa League for the third season running.

In 2018 Mannus made a return to Shamrock Rovers and soon established himself as a valuable member of their team.

Mannus (who moved back to Northern Ireland from Mississauga, Ontario with his family at the age of seven) won his first Northern Ireland cap against Trinidad and Tobago in the summer of 2004.He has also made appearances in friendlies against Bulgaria, Georgia and World Champions Italy. In a December 2015 interview, Mannus revealed that prior to becoming cap tied to Northern Ireland no one from the Canadian FA had ever been in touch with him regarding representing Canada.