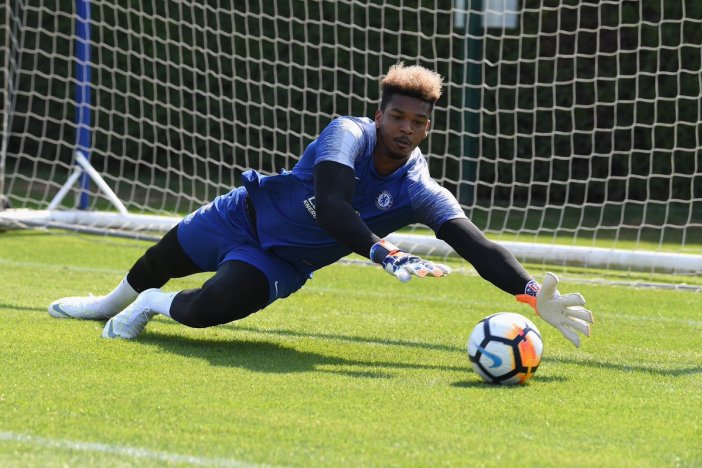 Blackman joined Chelsea at U13 level and progressed through the club’s youth system. He made his first appearance in a senior match day squad on 29 October 2011, sitting on the bench for a Premier League match against Arsenal which Chelsea lost 3–5 at home. He began to train regularly with the first team squad in the 2011–12 season and was an ever-present as Chelsea U18 won that season’s FA Youth Cup.

Blackman signed a new five-year contract with the club in June 2014.

On 31 August 2014, Blackman joined Championship club Middlesbrough on loan until January 2015. He made his full debut on 23 September 2014 against Liverpool in the third round of the League Cup as Boro drew 2–2 after 120 minutes but lost 13–14 in the resulting penalty shoot-out. His save from Raheem Sterling’s shot forced the shootout to sudden death, in which Blackman scored against opposition goalkeeper Simon Mignolet from the spot.

On 6 January 2015, following Mark Schwarzer’s departure to Leicester City, Blackman was recalled from his loan spell to work as the third goalkeeper with the first-team squad behind Thibaut Courtois and Petr Čech.

On 18 March 2016, Blackman joined Swedish side Östersunds FK on loan until 31 May 2016, to gain first-team experience. On 4 April, he made his Allsvenskan debut in a 1–1 away draw against Hammarby IF, playing the full 90 minutes. Later that month at Gefle IF, he kept a first clean sheet in a goalless draw.

On 15 August 2016, Blackman joined League Two side Wycombe Wanderers on loan until 3 January 2017. The following day, he made his debut against Accrington Stanley in a 1–1 draw at Adams Park. On 20 August, Blackman kept his first clean-sheet in 0–0 away draw against Blackpool. He then conceded 10 goals in the following 3 league games. On 1 January 2017, it was announced that Blackman’s loan spell had been extended until the end of the season.

On 27 July 2017, Blackman extended his Chelsea contract until 2021 before agreeing a season long loan to Championship side Sheffield United.

Blackman signed for Leeds United on loan for the 2018/19 season but found himself behind Bailey Peacock-Farrell for the early part of the season. When he was just about to make his breakthrough he suffered a broken tibia in a reserve game against Birmingham City. He returned to Chelsea to do his rehabilitation.

In the summer of 2019, Blackman signed on loan to Eredivisie side Vitesse Arnhem and will join up with them once match fit.