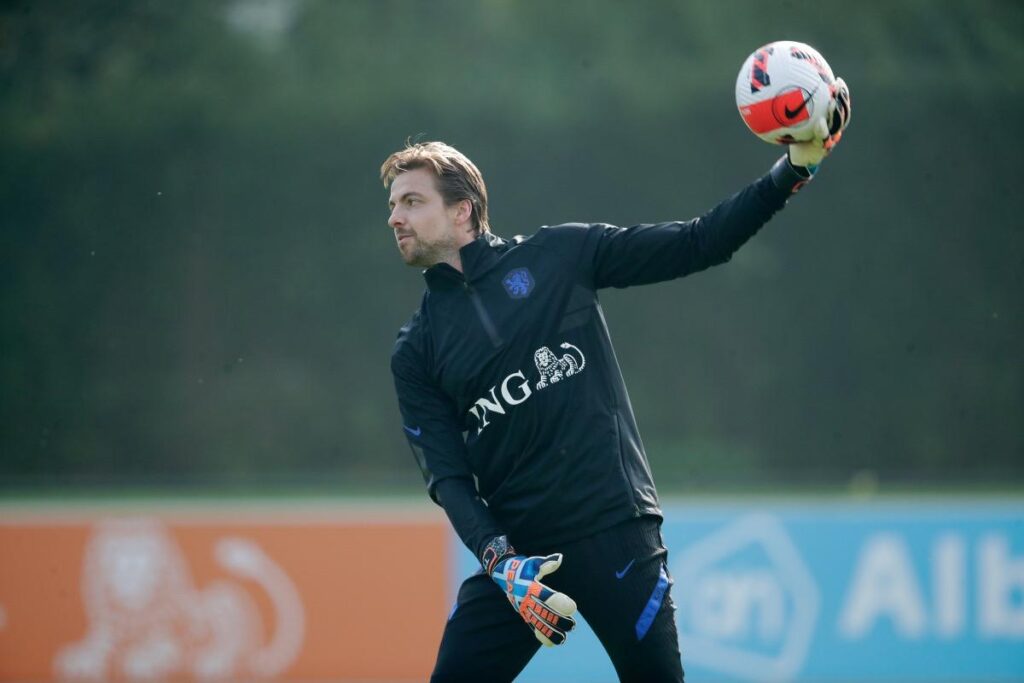 Krul began his career at hometown club RAS and later at local Eredivisie club ADO Den Haag. He joined Premier League club Newcastle United in the summer of 2005 on a three-year deal after failing to sign professional terms. ADO demanded a compensation fee and objected with the FIFA Dispute Resolution Chamber (DRC). The DRC denied the claim and ADO took the case to the Court of Arbitration for Sport (CAS). The CAS ruled in February 2007 in favor of ADO ordering Newcastle to pay €220,000 as compensation for the transfer.

He played in the Under-17 European Championship for the Netherlands in Italy in May 2005 and eventually made the step up to the Dutch under-21 squad. He made his first senior appearance for Newcastle in a pre-season defeat to PSV Eindhoven on 29 July 2006.

Following the injury to Newcastle’s first-choice goalkeeper, Shay Given, Krul was on the bench for a few games as back-up to second-choice Steve Harper. Krul made his Newcastle debut in the UEFA Cup game on 2 November 2006, away to Palermo. His debut was hailed by critics as he displayed his shot-stopping abilities, saving efforts from Giuseppe Biava and David Di Michele and recording a clean sheet in the process.

He injured himself in the warm up prior to the second leg tie against Palermo and then aggravated that injury in the warm up before a game against Watford. He required two cartilage operations as a result, keeping him out of action for almost six months. He returned to action in April 2007.

On 13 June 2007, he signed a new four-year contract with Newcastle. In the same month, he was part of the Dutch Under-21 squad that won the European Championships and also qualified for the 2008 Summer Olympics.

On 3 August 2007, Krul joined Scottish side Falkirk on loan originally until 1 January 2008, though it was later extended until the end of the season after a number of impressive performances. Falkirk initially wanted to sign him on a permanent deal however it was refused by Newcastle The following day he made his debut for Falkirk and kept a clean sheet as the team won 4–0 against Gretna.

In the two games immediately following his debut, he conceded four goals against Celtic and seven goals against Rangers at Ibrox. Krul was sent off for the first time in his professional career on 2 January 2008, after reacting badly to an opponent’s challenge. Shortly afterwards he was injured, suffering a dislocated shoulder during a Scottish Cup defeat against Aberdeen, and resulting in him missing the rest of the season.

On 21 November 2008, Krul joined Carlisle United on a one-month loan from Newcastle, to replace Ben Alnwick who had rejoined Tottenham Hotspur. The loan deal was extended for a further month in December with Krul returning to Newcastle in January.

Krul returned to Newcastle as the backup goalkeeper to first choice Steve Harper. He made his senior league debut on 8 August 2009 in the first Football League Championship game of the season away to West Bromwich Albion, coming on as a half time substitute for the injured Harper. Following this match, The Guardian called him “an excellent reserve goalkeeper”. He later played the full Football League Cup match against Huddersfield Town, on 26 August 2009, in which Newcastle won 4–3. Krul also started the 2–0 league cup defeat to Peterborough, where despite being on the losing side he put on an impressive performance. Against Swansea City on 28 November he again came on to replace the injured Steve Harper at half time. On 2 January he played in the FA Cup Third Round tie against Plymouth Argyle, the game ending 0–0. He then played in the replay at St James’ Park on 13 January and went on to win the match 3–0. Krul started his first league game for Newcastle on 2 May 2010 on the last day of the Championship campaign against Queens Park Rangers at Loftus Road and kept a clean sheet. In July 2010, Krul signed a new four-year contract with Newcastle.

Krul made his Premier League debut for Newcastle on 18 September 2010 against Everton at Goodison Park, coming on as a substitute in the 35th minute for the injured Steve Harper in a match that ended in a 1–0 win for The Magpies. He made his first Premier League start on 26 September against Stoke City at St James’ Park. He continued playing against Manchester City in a 2–1 loss, Wigan Athletic in a 2–2 draw and in the 2–1 away win to West Ham United before starring in his first Tyne-Wear derby which Newcastle won 5–1 and in a 1–0 away win at Arsenal a week later, pulling off some good saves in the process.

Following his good performances, Alan Pardew gave him more chances in goal. He eventually became first choice and Harper was sent on loan to Brighton. He started the 2011–12 season well, keeping clean sheets in the first two matches of the season against Arsenal and Sunderland. On 3 December 2011, Krul made his 50th Newcastle appearance against Chelsea, he saved a Frank Lampard penalty and made several other impressive saves, however Newcastle still went on to lose the game 3–0. His performances have made him a clear favourite with the Newcastle United fans, his most recent achievement being a 15th clean sheet in a single season with a 2–0 over Chelsea on 2 May 2012. On 3 March 2012, Krul signed a new five-year contract at Newcastle United. Krul then went on to play in the away game against Arsenal, which Newcastle lost 2–1. During the match, fellow Dutchman Robin van Persie accused Krul of wasting time throughout the match and taunted Krul after the match ended. The row continued until the tunnel and the two players had to be separated. Although he received criticism from Arsenal player Jack Wilshere, team-mate James Perch defended Krul, believing van Persie “out of order”. At the end of the season, Krul received Toon Talk’s Newcastle United player of the year award.

In the summer before the 2012–13 Premier League, Krul was given the number 1 shirt number, with Steve Harper receiving number 37. Krul was featured as starter goalkeeper for the three opening matches before suffering an elbow injury whilst in international duty. After seven week off, due to an elbow injury, Krul returned to training. Krul made his return in Tyne–Wear derby on 21 October 2012, which ended in a 1–1 draw. He injured his ankle during a Europa League match in the Round of 32 against Ukrainian side Metalist Kharkiv, which ruled him out for five weeks. Upon his recovery from an ankle injury, Krul feared his season was coming to an end. In the Tyne–Wear derby on 14 April 2013, Krul suffered a dislocated shoulder on 57th minutes after he “landed awkwardly after punching away an Adam Johnson free-kick”. After surgery on his dislocated shoulder, Krul was ruled out for the rest of the 2012–13 season.

In the 2013–14 season, Krul made his first appearance of the season since he recovered from an ankle injury in a friendly match against Rangers. In November, Krul made some impressive displays, conceding two goals in two games against Norwich City and West Brom while keeping clean sheets against Tottenham (in which he made a total of 14 saves during the match) and Chelsea. His impressive displays earned him November’s Premier League Player of the Month. Krul’s performance was praised by Newcastle United goalkeeper legend Pavel Srníček and manager Alan Pardew.

Krul sustained an ankle injury in training before their match with West Ham United and was ruled out for up to six weeks with the injury. Krul would return to action in his side’s 2–0 defeat to Chelsea.

Return to the Netherlands (loan)

On 25 August 2016, Krul signed a new one-year contract extension at Newcastle United before joining Ajax on a season-long loan deal to provide him with top-tier football as he continued his recovery from injury and Newcastle was relegated the previous season. That deal was cut short after Krul had played six games for the club, and in January 2017, he joined fellow Eredivisie side AZ Alkmaar on loan for the rest of the season.

On 31 August 2017, Krul signed for Premier League club Brighton & Hove Albion on a season-long loan, reuniting him with former Newcastle manager Chris Hughton. n 19 September, he made his debut for the club in an EFL Cup third round tie against Bournemouth. The following day, he signed a permanent deal with Brighton, ending his twelve-year association with Newcastle. At the end of the season, Krul left the club.

Krul signed for Championship club Norwich City on 24 July 2018 on a two-year contract. He was an integral part of the Norwich Championship winning team securing promotion to the Premier League. Tim signed a new three-year contract with Norwich in the summer of 2019 and has cemented his place as the club’s number 1 goalkeeper with a string of fine performances on their return to the Premier League, most notably in the 3-2 win over defending champions Manchester City at Carrow Road.

Krul represented the Netherlands national football team at U17 level at the 2005 FIFA U-17 World Cup in Peru. He represented the U21s at the 2008 Toulon Tournament and was a regular in the side for the 2011 European Under-21 Championship qualifying campaign.

On 4 June 2011, Krul made the starting eleven for the Netherlands in a friendly against Brazil, his first cap at senior level. He went on to keep a clean sheet, pulling off a string of decent saves in a 0–0 draw. He played his second match for the international team four days later against Uruguay in a 3–4 penalty shoot-out loss, after the match finished 1–1 after 90 minutes. He was included in the Netherlands UEFA Euro 2012 squad, but did not make any appearances. In new coach Louis van Gaal’s first competitive game in charge against Turkey in Amsterdam, Krul was selected as starting goalkeeper, keeping a clean sheet in a 2–0 win for the Oranje.

In June 2014, Krul was included in the Netherlands’ squad for the 2014 FIFA World Cup in Brazil. In the quarter-final against Costa Rica, he was brought on by Louis van Gaal as a 120th-minute substitute for the penalty shootout. He saved two of the five penalties he faced as the Netherlands won 4–3. That was the first time in the history of the World Cup that a goalkeeper was sent in as a substitution solely for penalty shootouts.